The 99th General Session of IADR

Opening Remarks
Prof. Eric Reynolds, who has provided outstanding guidance regarding CPP-ACP, has been appointed as the new President of IADR and gave a very inspiring opening address for the event. In his speech, titled “IADR 100 Years On: Driving Science, Engagement and Globalization Post COVID-19,” Reynolds detailed how he joined IADR in 1983, when the meeting was held in Sydney, Australia, and connected there with worldwide researchers who stimulated his career. In particular, Reynolds commented that Makoto and Makiko Nakao were both among the 21 individuals who most provided him with “inspiration and influence.” 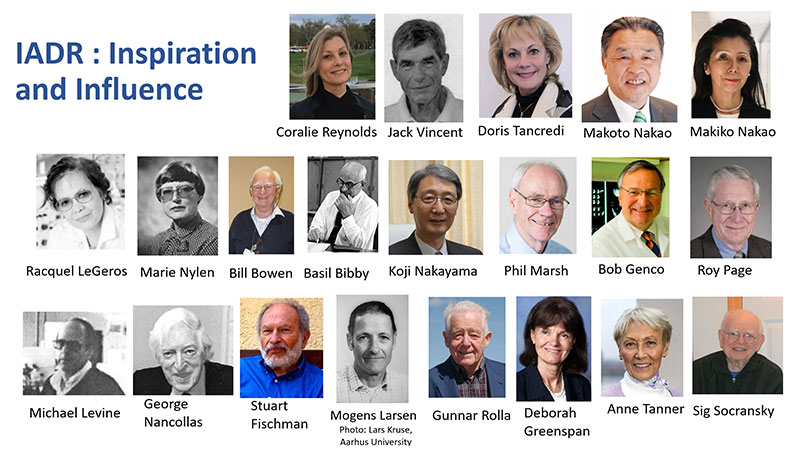 Based on this experience, Reynolds emphasized the importance for young researchers to use IADR as a global networking platform.

Reynolds highlighted the importance of embodiment of research outcomes emerging from academic-industrial partnerships and contributions to society, as well as the necessity of stepping up efforts to effectively maximize performances with stakeholders.

The second GC activity was the awarding of the IADR GC Centennial Travel Grant, which is open to young researchers within 10 years of graduation and working on maintaining and improving the oral health of elderly people. This year, the grant was awarded to Dr. Carolina Duarte (Nova Southeastern University, Florida, USA), for her work on “Porphyromonas Gingivalis-Derived Sphingolipid Induces Lysosomal Dysfunction and Osteoclastogenesis via Cathepsin-B” and was announced at the Opening Ceremony.

Presentation About Foundation Nakao for Worldwide Oral Health Activity
During the poster sessions, Yusuke Shigemitsu from GC International AG presented an abstract entitled “Development of Restorative Options Decision Tree for Amalgam Alternative Materials,” describing the creation and utilization of the Restorative Options Decision Tree. This project was initiated by Prof. Reinhard Hickel from University of Munich and developed with experts from the Foundation Nakao for Worldwide Oral Health management board. Discussions using the Zoom video conferencing platform were held during the poster session with active discussions reflecting the high interest for this topic. This decision tree is available as a user-friendly web app, linked below: hhttps://zingtree.com/deploy/tree.php?z=embed&tree_id=510390943

Achievements of GC Researchers
Ten poster presentations were made by researchers about GC’s latest products, such as G2-TM
BOND Universal and G-CEMONE.GC researchers used the advantages of online platform to hold
interactive discussions with the researchers worldwide. The eBook, including the research and development abstracts about GC products, is available as a web app. Click the link below to discover the science behind GC’s products:
https://www.gcdental.co.jp/literature/GC_IADR99th_ebook/html5.html