Leuven, October 2019 – GC Europe NV has received the highest recognition the European Foundation for Quality Management (EFQM*), and has become the first company in the dental industry and the first subsidiary company of a Japanese Corporation to win this award. 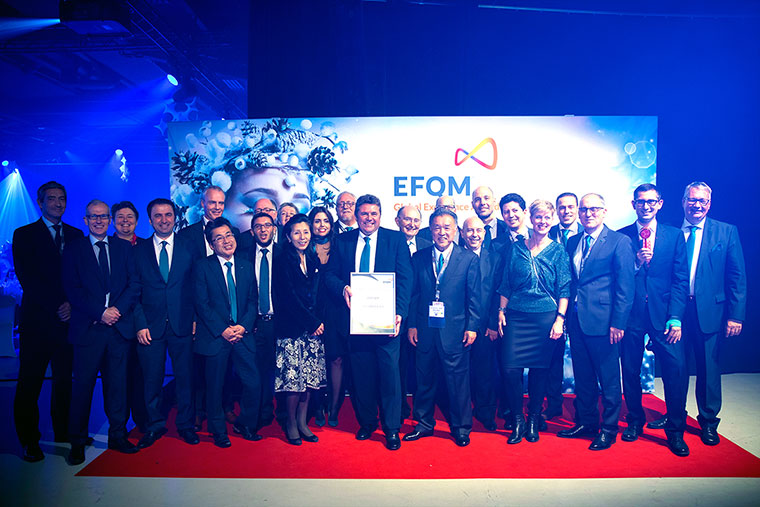 The aim of the non-profit membership foundation EFQM is to create an environment where organizations can learn from each other to continuously improve their performance using the EFQM Excellence Model.
The renowned Excellence Award is supported by one of the most challenging assessment processes. A feedback report will be created by EFQM assessors and placed at the applicant’s disposal to facilitate and promote advancements. The report is not only given to the respective applicant, but also submitted to a jury of independent experts. They determine the applicant’s level of recognition. Only those organisations with a sustainable exceptional performance in all eight fundamental concepts of excellence can win the EFQM Global Excellence Award. Some of the previous years’ Excellence Award Winners were Infineon Technologies (2018), Robert Bosch (2017), BMW (2015), Bilim Pharmaceuticals (2011), Grundfos (2006), TNT (2005) and Volvo (1999)

This year, the Award Ceremony was held in Helsinki, Finland, on October 23. GC Europe was the only candidate to become the Global Excellence Award Winner. Among the selected finalists were Swiss Post, Bosch Security Systems, BMW, SDLG, Metsä Group, between others.

Key strengths for which GC Europe was recognized Award Winner
The assessors and jury recognised as Role Model GC’s exceptional and unique culture, called GC No Kokoro, which has its roots in Nakama spirit. This spirit is the basis of the company’s culture, promoting a sense of people belonging to a community. Leaders in GC Europe live and promote this culture, values and principles in all areas. These consistent efforts have ensured that all associates are fundamentally connected to the company’s systems, allowing everyone to grow and prosper together. Associates of GC Europe are particularly proud of how European and Japanese influences converge in business harmoniously. (Fig.1)

The core philosophy of GC Europe can be summed up in one word – Semui. This translates into “thinking from the viewpoint of others” and this way of thinking permeates throughout all aspects of the company’s relationships with dental practitioners and dental technicians working with GC products, associates, suppliers and partners.

As a matter of fact, it is this strong culture of transparency and trust that was highlighted as a strength of GC Europe by the EFQM assessors. The philosophy places ethical values over short-term growth objectives, and it supports sustainable product development that benefits the whole society.

Other strengths identified by the assessors are the GC’s Quality Management System (GQM), and the concept of Minimum Intervention (MI). MI is one of the vision strategies GC Europe employs to improve global oral hygiene of the society and is the company’s most important contribution to human health. (Fig.2)

What is next…
This is not the end of GC Europe Excellence Journey; on the contrary, this is the beginning of a new path. (Fig.3)

The big gains obtained at GC Europe NV by applying the EFQM Model, justify the role out of this management model at the whole GC Europe Group. GC Europe AG managers together with the managers from each entity will develop a deployment roadmap for the new EFQM Model 2020 to support the One GC Europe Strategy. 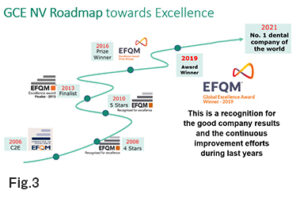